The weekend started of tragically on the roads when a man died at around 17:00 in the Oviedo area, when the truck he was driving overturned and burst into flames on the AS-215 road in El Rodical. Once the flames were extinguished fire fighters could then remove the lifeless body of the man from the vehicle. 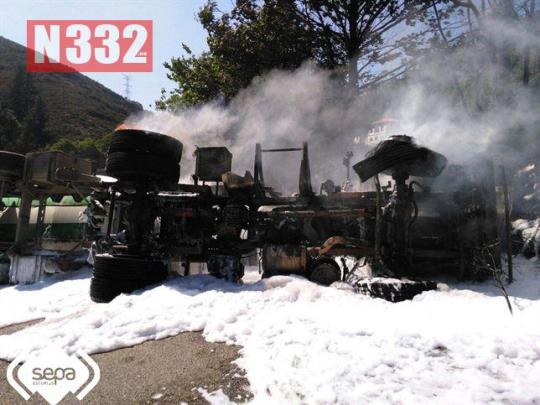 A motorcyclist was injured after being in collision with a car at around 15:20 in Santander on Saturday. The biker suffered a variety of injuries and was taken to hospital as a result. Meanwhile, also in Santander and at around the same time, a 14 year old chils was injured in a collision between a bicycle and a car.

A 52 year old cyclist participating in a road race suffered injuries after falling from his bike in Elosua, when a chicken crossed the road in front of him.

At around 17:00 on Saturday a vehicle collided with the guardrail near to Can Picafort a Nuroon the island of Mallorca. As a result of the collision the driver was thrown from the vehicle and died as a result of multiple injuries sustained.

Four people were injured on Saturday afternoon in the O Porriño area of Pontevedra in a collision with a tractor.

One driver had a lucky escape when his car left the road in the Derio area of Bilbao, as the vehicle was leaving the N-663 at the airport junction at around 16:00 on Saturday. The sole occupant of the Audi A3 suffered minor injuries and had to be extracted from the vehicle by fire fighters. However, a subsequent breath test revealed that the driver was five times over the permitted maximum limit.

Six people were injured, including a pregnant woman and a 12 year old child, when two vehicles collided at around 23:00 on Saturday night in El Ejido on the N-340 main road.

Just after midnight on Saturday night two cars collided on the N-332 main road in Cartagena, resulting in one person being killed and two others injured. As a result of the impact some of the people remained trapped in the cars which then became more serious a situation as one of the vehicles burst into flames.

Local residents managed to control the flames by using fire extinguishers before the emergency services arrived. The dead man was reported to be 75 years of age and of Spanish nationality, whereas those injured were said to be 42 and 45 and of foreign nationality.

A car collided with a concrete wall which separates the motorway and a commercial centre at the Bahía de Santander at around six in the morning on Sunday, the vehicle overturning as a result. When the emergency services arrived at the scene the occupants had already fled.

On Sunday, a motorbike collided with a tractor in Moral de la Reina, in the province of Valladolid, with the 40 year old biker suffering injuries of varying degrees.

In the Álava town of Lantarón, a car and a motorbike crashed head on resulting in the biker being injured and being taken to hospital.

The post Another Tragic Weekend on the Roads appeared first on Driving In Spain.