We have been asked many different times about the significance of other colours used on pedestrian crossings. Most people are aware of what we might call a “zebra”, with black and white alternating stripes across the road, but what about the red ones, or blue ones or any other colours? There are two ways of answering the question, and so we will start with the simple and legal one. Article 168 of the Tráfico, Circulación y Seguridad Vial, says…

To explain what that means in as literal way we can, it states that pedestrian crossings are formed of a series of wide lines arranged from the pavement and parallel to the axis thereof, forming a set across the road where drivers of vehicles or animals must let pedestrians pass.

However, in answer to your question about different colours used on crossings, the last phrase, “NO podrán utilizarse líneas de otros colores que alternen con las blancas”, states that you must not use other colours that alternate with the white ones. Therefore, by the legal definition set out in this document, the only colours which should exist on pedestrian crossings are white, and the colour of the road.

However, the more complex answer comes about when we look at different methods of traffic calming, means to slow down road traffic to create a safer environment for all.

There have been many different studies relating to traffic calming, and highlighting pedestrian crossings better has been the outcome of some of that research. 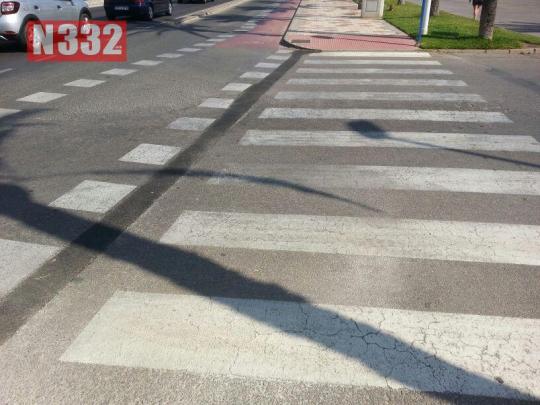 A study in 2014 concluded that the best way to make crossings safer for pedestrians was to “transform these pedestrian passages into eye-grabbing spectacles: a school of colorful fish, a skein of yarn, a skeleton, a row of large-caliber bullets.” However, that study was done by an artist rather than a road safety professional, although the impact was successful. By creating a surface which drivers looked out for could improve the awareness of the crossing, but other experts also suggest that these could do more damage than good, as distracting a driver from the vulnerable road users is a recipe for disaster, as drivers look at the crossing and not the people on it or waiting to cross. 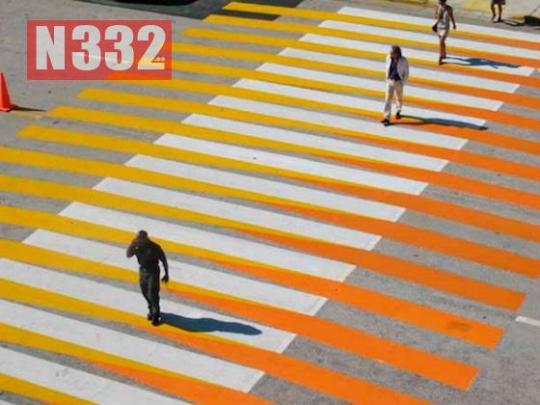 You will see that many of the coloured crossings are on raised humps, again traffic calming measures, but a lot of these humps also don´t fall in with the legal requirements set down by law, and so quite a lot have been removed in recent years.

There are many different reasons why crossings are different colours, but as the majority of those which have been marked other than that laid down in law are under the control of local authorities, it is the reasoning for each one of those that is the only answer to the question, as nationally, all we can say it what the law clearly states, “NO podrán utilizarse líneas de otros colores que alternen con las blancas”.