The DGT has announced a special vigilance campaign against speeding motorists, which will take place between the 20th and 26th of July.

Extra mobile speed checks will be in place around the country, especially on roads which are known to have more incidents than others, such as main roads.

According to the DGT, inappropriate speed was a factor in 10% of the 89,500 injury incidents during 2013, a figure that rises to 17% when filtering out incidents to only include those on the main roads.

In fatal incidents, excessive speed was a contributory factor in 22% of all incidents. Therefore, according to the DGT, if all vehicles were travelling at the right speed, a quarter of those killed, around 400 people, would still be alive and 1,680 incidents would have been avoided.

All roads have speed limits, generic or specific, and if this limit is exceeded then a driver, if detected, will be punished. But even if a vehicle is driving below the allowed maximum limit, external circumstances such as rain or ice, or vehicle characteristics such as using an emergency wheel can alter what is an appropriate speed to drive at.

The Road Safety Laws dictate that a driver must respect the speed limits and adapt the vehicle´s speed so as to allow it to stop in its field of view, taking into account any obstacles or hazards that might present themselves, taking into account their physical and mental conditions, characteristics and condition of the road, vehicle load, weather, traffic and other circumstances. That is the safe speed.

The faster your car is travelling, the more distance and time it will take to stop. Stopping distances consist of two parts, reaction time and braking time. The average reaction time is between 1 and 1.5 seconds, during which time the vehicle is continuing towards a potential hazard at speed. The faster the vehicle is travelling, the more distance it will cover in this time. Reaction times can be altered by other characteristics such as distraction, alcohol or drugs, or other factors.

Reducing speed not only allows for more reaction time and an increased chance of stopping, it also reduces the damage in the event of a collision, possibly even making the difference between life and death in many cases. According to the 2004 Nilsson report, a decrease of 1% of the average speed on a road produces a 4% reduction in fatal crashes. In addition, it is argued that a reduction of 10 km / h of speed limits would imply a reduction in mortality of around 10%.

Although traffic police will be out in force monitoring speed, it is in everybody´s interest to be more vigilant and respectful of the limits put in place, not only by means of the signs on the road, but also the signs that indicate the factors that may mean the need to slow down is greater. 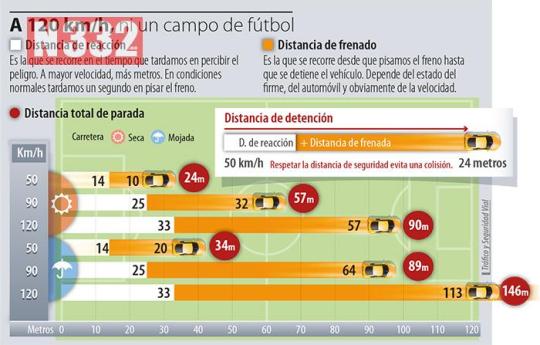 The post Increase in Speed Checks This Week appeared first on Driving In Spain.