This weekend marks the next major traffic operation on the roads of Spain, marking the midpoint between the summer holiday start and finish. 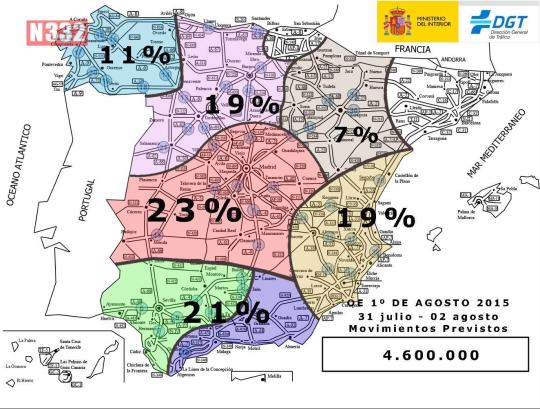 As a result, there will be increased traffic flowing from both inland areas towards the coast and mountains, and returning from the holiday areas back inland.

The main flow of traffic is expected to be on Friday afternoon heading from the cities to the coast, and on Sunday heading back to the inland areas, although both directions will be busy throughout, as this is one of the few weekends in the traffic calendar when traffic flows in both directions.

In total, there will be an estimate 4.6 million journeys on the roads between Friday the 31st of July, and Sunday the 1st of August.

In order to minimize disruption, the DGT will be operating a special campaign on the roads, which includes restricting the movement of dangerous goods, suspending all routine road works, creating special lanes to ease the flow of traffic, and having more Guardia Civil traffic officers and support staff on the roads throughout.

Throughout the month of August, the DGT expect 43.2 million trips to be made on the roads.

The post A Busy Summer Weekend on the Roads appeared first on Driving In Spain.