Already ground-breaking in their method of policing the roads from the air, the DGT has contracted a Spanish company to create an “Unmanned Aerial Vehicle, or “drone” to monitor traffic. With many of their helicopters already fitted with the pinpoint accurate Pegasus radar system, the DGT already use their eyes in the sky for speed detection as well as traffic flow, this latest development could revolutionise the skies once again.

However, the current legislation does not allow for the use of drone to monitor traffic, as the pilot of the drone has to be able to maintain visual contact with the aircraft, and so monitoring could only be done on a local level.

That said, it is intended that the first prototypes will take to the air in summer of 2016, equipped with a camera and setting about monitoring the conventional road network.

The drone is much cheaper to fly that a conventional aircraft and offer a faster response. In addition to monitoring traffic flow, it is hoped that they could be used emergency and incident response, following exceptional loads, fault detection and (eventually) enforcement.

Drones are already in use by numerous police forces around the globe, often for monitoring purposes, and in America there was a huge outcry in 2013 when California´s highways suddenly saw warning signs about Law Enforcement by Drones, although on this occasion it was part of an art project and not real. 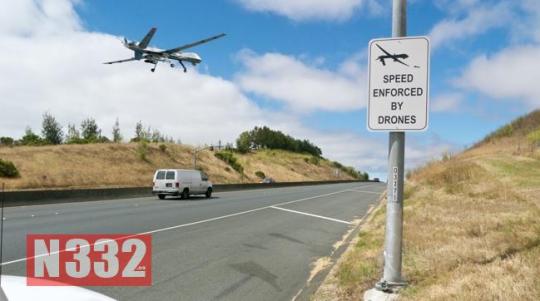