An articulated lorry crashed on the A-7 motorway between Elche and Aspe on Wednesday, resulting in the cab hanging precariously over a 15 metre drop. 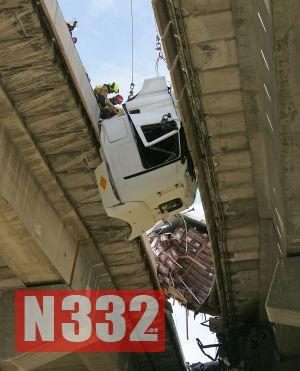 The incident occurred at around 07:30 in the morning as the truck loaded with bananas collided with the guardrail and landed wedged in a gap between the carriageways.

A fire broke out but was quickly brought under control as the two occupants of the vehicle were treated for minor cuts and bruises.

The crash resulted in delays through the area for most of the day whilst experts assessed the scent in order to work out how to recover the truck.