The special operation monitoring Christmas traffic begins at 15:00 on Wednesday 22 December, and runs through until Wednesday the 6th of January. 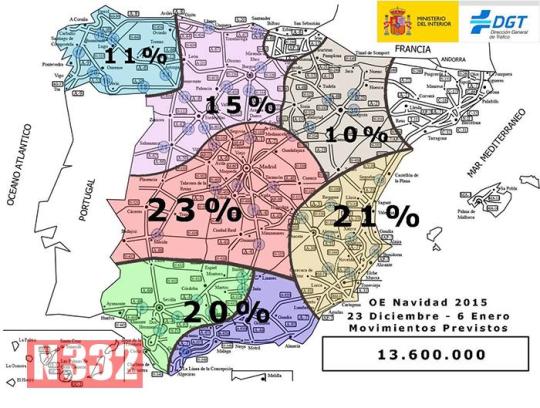 During the period, the DGT estimate some 13.5 million journeys will be made on the roads of Spain as families get together to celebrate the festive season, schools and offices close their doors and there is an increase in visitors to shopping and leisure centres.

The operation is separated into three distinct phases, divided as Christmas, New Year and Three Kings. The 1st phase runs between Thursday the 24th and Sunday the 27th of December. Phase 2 is from Thursday the 31st of December until Sunday the 3rd of January. Phase 3, the final operation, runs from Tuesday the 5th until Wednesday the 6th of January.

There will be a number of problem times when driving is only recommended if it is necessary, as the roads will be particularly busy.

During the Christmas operation, the worst times are between 18:00 and 21:00, with an hour either side also being problematic. Mornings are also expected to be busier than normal.

For the New Year period, the worst times of day are between 10:00 and 13:00, and again an hour either side. Late night over New Year itself is also a particularly dangerous time.

During the final stage for Three Kings, the worst times are between 19:00 and 21:00, and an hour either side.

There will be a temporary ban on most road works and restrictions in place for certain heavy goods vehicles in order to ease congestion. Additional lanes will be provided in some areas, especially near larger cities.

There will be an intensified campaign to identify problem drivers, especially those who consume alcohol or drugs.

In order to ensure safety on the roads, there will be around 10,000 Guardia Civil traffic officers on duty, supported by 800 monitors and 13,000 operational staff.

The traffic flow will be monitored through 1,603 cameras, 2,388 data collection stations and by use of 2,214 variable message signs.

The 12 helicopters operated by the DGT will also be in the air carrying out surveillance missions from bases in Madrid, Valencia, Malaga, Seville, Zaragoza, Valladolid and A Coruña. Of those, 8 of them are equipped with the Pegasus radar detection equipment.

Always allow extra time for your journey, take plenty or rest breaks, take your time, observe the rules and laws and try to avoid the busiest times where possible. Avoid consumption of alcohol or drugs and respect your fellow road users and you should be able to enjoy the festive season safely.