The Spanish road network is gearing up for the start of its busiest periods, as the first weekend of the summer holiday season starts on Friday. 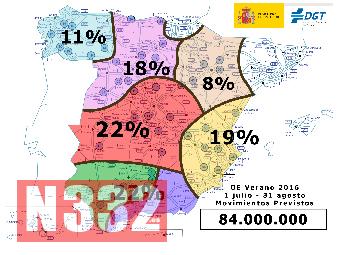 As usual, the busiest periods, and therefore the major traffic operations, are split into three main weekends. The first operation runs from 15:00 on Friday the 1st of July until midnight Sunday the 3rd of July. During this period, there will be an anticipated 4,050,000 long haul journeys on the roads, with the main flow of traffic heading away from inland and city areas to the coast and mountainous regions.

The full timetable of summer operations:

The most problematic areas are the roads leading directly to tourism hotspots, including much of the N-332 in areas such as Santa Pola, El Altet, Altea and Torrevieja.

In order to ease congestion, most major road works will be suspended and there will be restrictions on the movement of certain types of goods. Extra lanes will be created in the busiest areas and the Guardia Civil traffic police will be out in force to ensure the safe flow of vehicles.

In addition, the road network will be supported by helicopters monitoring traffic, and the cameras situated on most roads.

The advice, as always, is to try to avoid the busiest times, allow extra time for your journey, stay calm and adhere to the laws of the road at all times.