Officers from the Guardia Civil have arrested a 26 year old Spanish national after the driver of a vehicle attempted to avoid a breathalyser test, then drove for over 30 kilometres in a reckless manner, injuring two Guardia Civil officers and colliding with another vehicle. 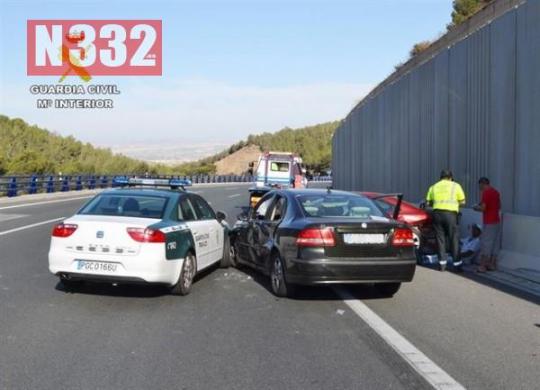 The incident occurred on Sunday on the A-30 in the San Javier area of Murcia when officers stopped a vehicle at a routine alcohol and drugs checkpoint on the RM-19.

Having noticed the officers instructing the driver to stop, the vehicle sped off at high speed in the direction of Murcia, and so a routine operation was immediately implemented to attempt to stop the vehicle without risking other traffic on the road.

As the vehicle continued it was observed by the officers carrying out a variety of illegal and dangerous moves whilst travelling at speeds in excess of the maximum limit. A number of other vehicles had to take evasive action to avoid being hit by the fugitive vehicle.

Upon entering the A-30 Albacete road the driver lost control of the speeding vehicle and collided with the central reservation, leaving the lane and proceeding in the opposing direction on the other side of the road before colliding with a vehicle heading in the correct direction.

The fugitive eventually became trapped but continued to try to escape by ramming the vehicle with which it had collided, with the innocent victims still inside, before eventually being brought to a stop by a traffic car and the officers arresting the fugitive, although not before two of them were injured in the continuing attempts to resist arrest.

The driver was subjected to a breathalyser test which showed double the maximum allowed amount but by refusing to complete the test the driver was arrested for refusing.

The driver was presented to the courts for sentencing.