Bowls Championships in May
Advertisement 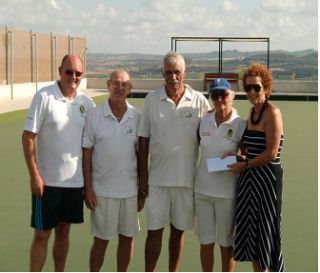 Los Montesinos will become the bowls capital of Spain in May, as the town plays host to a championship tournament.

Some 2,000 people are expected to descend on the town to participate in the competition, which will take place between the 11th and 25th of May.

The councillor for Tourism and Sports in Los Montesinos, Ana Belén Juárez, launched the competition at the FITUR tourism event, explaining how, “Los Montesinos will become the centre of this sport because for two weeks we expect the attendance of the best players in Spain of this very peculiar sport that is English bowls. A sport, which is not well known in Spain but little by little it is becoming more so, especially in our area due to the large number of foreigners who choose our territory to have a house as a second home,”

As far as the competition is concerned, the 200 expected players will compete in different disciplines: singles, doubles, triples and quadruples, in categories of women, men and mixed. And they will have their finale on the 25th, which will be when the semi finals and finals of all the categories will be played, along with a final championship ceremony at the Greenlands Bowls Club in Los Montesinos.

The host club, which already hosted the Valencian Community Championship last September, covers an area of 40,000 square metres on which there is an 8-rink English bowling alley, and is already well known by local bowlers.

Women and Constitution: the constitutional reform from gender-sensitive analysis