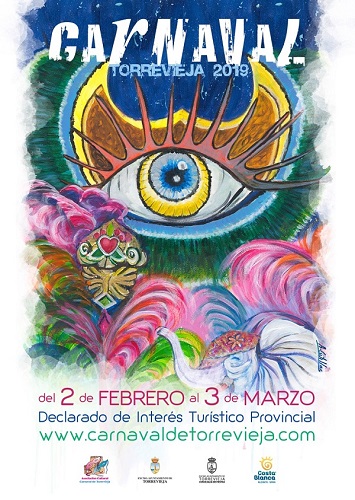 This weekend, visitors to the FITUR tourism event have been treated to a preview of the parade, and now it´s time to get your feathers ready, your colourful frocks prepared, your drums and maracas tuned, and your scary costumes exhumed, because carnival is about to begin in Torrevieja.

The schedule begins on Saturday 2 February, with the proclamation and the coronation of both the Children and Senior Queens, and will finish on 2 March with the famous Night Parade and awards ceremony.

The mayor of Fiestas, Domingo Perez, Perez, who has described these festivities as “one of the great events held by his Council,” wanted to highlight the great reception and participation of ensuring that “many people will attend all the planned events” both in the closed sites and, above all, on the street, “since the character of the Mediterranean makes us especially enjoy outdoor parties,” he said.

and the new Board of Directors of the Cultural Association Carnival of Torrevieja, with its president at the head, Francisco Pizana Cutillas, announced today the details of the Carnival 2019 in Torrevieja, which will begin next Saturday 2 of February,

Francisco Pizana, the president of the Carnival Board, detailed the program, which begins on Saturday 2 February 2, at 9 p.m. at the International Auditorium, with the opening speech by the Cádiz-born Pepe Moreno Rodríguez, known as ‘Pepe el Caja’ and the coronation of Ángela Ferrándiz Gómez as Reina Infantil and Paola Fernández Saura as Reina Mayor, both of the comparsa ‘Puerto Rico’.

The president of the Association, also reported the importance of the drag queen competition, which has now gained national recognition, and will take place on Saturday 9 February, at 9:30 p.m.

In the same way, between 4 and 5 groups will participate in the National Contest of Chirigotas “Ciudad de Torrevieja”, on Saturday 16 February, among which the participation of the Chirigota de Beniajan stand out.

In reference to the parades of the Carnival, the Grand Carnival Parade Contest, which will take place on Sunday 24 February, along its usual route through the town centre, and is expected to see some 31 local comparsas take part.

The main night parade will be on Saturday 2 March, which as a novelty this year, will also be the Contest of Comparsas Foráneas, which will open this parade and which will start this year start at 7:00p.m. Likewise, there will be a grand finale to the Carnival with a party at the Plaza de la Constitución, where all the prizes will be awarded.

There will also be a special carnival day on Sunday 17 February, with bouncy castles and fun for all those taking part, with the hope of bringing everyone together as one, to support coexistence. There will also be a giant paella for 120 people in the Plaza del Sagrado Corazón (La Ermita). The Dance of the Third Age organised by the association will be held on Thursday, February 28 at the Municipal Leisure Centre.

Also as a novelty this year, although it was already foreseen some time ago, there will be a children’s parade “The carnival of the cabbages”, a small tour with sound-making vehicles, in which the opportunity will be given to the youngest of the cabbages, to wear their costumes. The parade will be on Friday 1 March, and will begin at around 5:00 pm from the Virgen del Carmen Cultural Centre, ending in the Plaza de la Constitución, where chocolate will be offered and there will even by monkeys and entertainment for the little ones.

Pedestrian Knocked down in Torrevieja