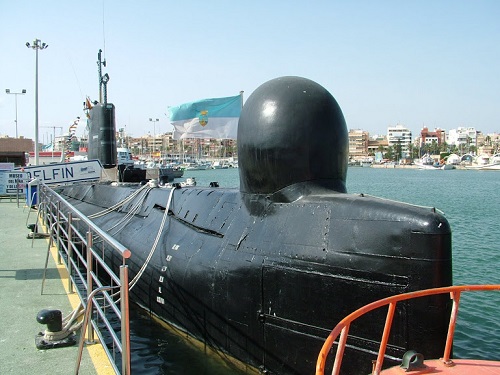 As the annual tourism exposition takes place, FITUR, promoting the values of Spain to the sector, Torrevieja has stood out by offering what they consider to be a world first, a chance for people with reduced mobility or physical restrictions to experience life on board a submarine.

The S-61 Delfin submarine was donated to the town´s Sea and Salt Museum by the Spanish navy when it was decommissioned in 2004. The submarine is one if the static displays of historic and replica artefacts within the museum network, which has already been visited by thousands of people wanting a taste of life aboard a narrow metal tube underwater.

With very limited space and cramped conditions, the sailors in service had to endure proximity clashes that could make life very difficult, especially in the event of some of them not getting along. Now, as a museum piece, friction and a life of weeks or months at sea are no longer a challenge, but getting visitors into and out of the ship is still no easy task, especially as the average tourist perhaps lacks the physical sleekness of the highly trained sailing personnel.

That challenge of opening the limited space to as many people as possible was one taken up by the town council, and now, S-61 Delfin has been adapted so that those with reduced mobility can also enjoy the tours.

It was during the recent FITUR event that Torrevieja´s councillor for tourism, Fanny Serrano, announced that the submarine had become the first of the world to be adapted to people with “functional diversity”. Serrano made the announcement accompanied by the Vice President and Minister for Equality and Inclusive Policies, Mónica Oltra, and the Regional Secretary of Tourism and President of Turisme Comunitat Valenciana, Francesc Colomer, excitedly explaining the achievements of the collective group.

Although the full details of the adaptations were kept for another day, Serrano confessed that “the idea of ​​turning our submarine into an accessible showcase was developed in FITUR two years ago. When we saw the inclusive routes for the first time we thought that Torrevieja had to be there in some way, since we are a city that has always stood out for our hospitality, accepting and helping all kinds of people”.

The councillor wanted to emphasise that “the technical work has been extremely complex, but we believe it has been worthwhile and it is an action that places Torrevieja as a reference in terms of accessible tourism”, pointing out that “our submarine received more than 20,000 visits a year and thanks to this now it will receive many more”.

Serrano also reported that the town hall has received congratulations from the Navy and the Defence Staff, who have also asked that the details be shared in order to use the project as an example to other municipalities.

For its part, the vice president of the Generalitat Valenciana, Monica Oltra, stressed that the regional government aims to achieve “accessible tourism for each and every one of the people, without exception or exclusion”, understanding “accessibility as a right” of all, including sectors that have not been sufficiently taken into account, such as people with some type of disability, but also others such as childre or the elderly.

In this context, it was pointed out that through Turisme Comunitat Valenciana, the ‘Strategic Plan for Accessible Tourism 2017-2019’ has already been developed, which has a total of five strategic lines and 33 specific actions. The purpose of these new routes is “to implement true inclusive tourism in our territory and guarantee the enjoyment of tourism elements for people with disabilities on an equal footing”.