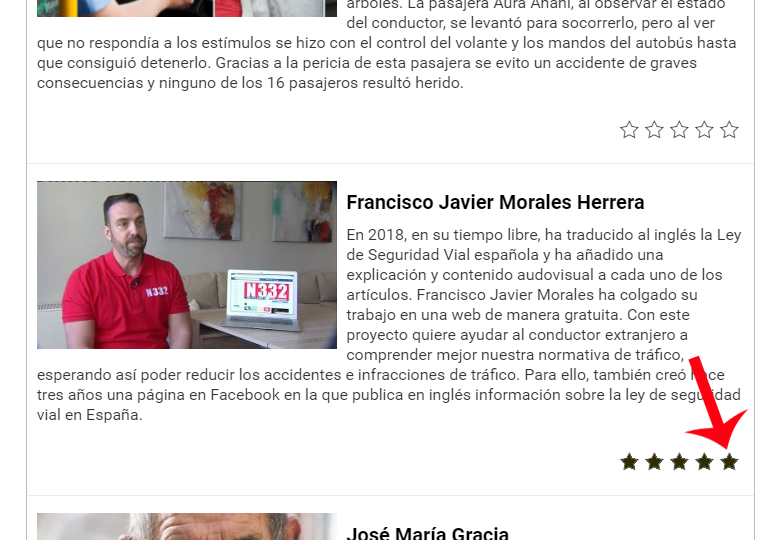 Once again, the N332 Road Safety Project has been nominated and shortlisted in a national award that recognises contributions to road safety.

The “Ponle Freno Citizen 2019” is awarded public vote, and so we need your help to support us.

Representing N332 once again is Francisco Javier Morales Herrera, the original founder of the project group, a serving Guardia Civil traffic officer based in Torrevieja.

The nomination this year has been given thanks to the volunteers and supporters who helped to translate the Spanish Traffic Law eBook, which, as the nomination itself describes, aims to help foreign driver better understand our traffic regulations, hoping to reduce accidents and traffic infractions.

Everyone at N332 acknowledges the tireless work the other candidates have undertaken.

Whilst travelling on a bus on the Llanes-Oviedo line, Aura Anahi noticed that the driver was in trouble and took control of the bus to bring it to a safe stop, avoiding serious injury, or worse, for the 16 passengers on board.

José María Gracia was a municipal worker who died in 2018, known locally as el ‘hombre semáforo’, he regulated traffic for 20 years in the Zaragoza town of Quinto, as the school crossing patrol, “lollipop man”.

Finally, we have Francisco Javier Morales Herrera, a Guardia Civil traffic officer who first devised and set up the N332 project, which developed into a Facebook page, a website cataloguing news and articles, outreach work within the community, and this latest major project, the translation of the Spanish Traffic Law into English.

Much as we do recognise the work of the others, and we respect the work that they do tremendously, we are asking now for your help to vote for Francisco, who is representing everyone behind the project who have taken it to where we are today.

Winning the award, which is nationally recognised, will help raise awareness of the need for such documents as the traffic law to be available in multiple languages, or at least English, as it is vital, in fact life-essential, that these safety-critical laws are understood.

The nomination alone adds strength to the project and our ability to lobby for important change like this, whilst still continuing to develop, whereas winning would prove our argument for the need of this to be done, across all platforms.

Voting is easy. All you have to do is visit the page of the organisers, at https://compromiso.atresmedia.com/ponlefreno/premios/2019/vota-ciudadano-ponle-freno-2019_201903205c923ea80cf24e4f1c6643ad.html (or visit n332.es where we have put a direct link to make it easier to remember). Then scroll down to where you see Francisco, dressed in the N332 red polo shirt, and click the fifth, the right-hand star in the row of five BELOW the paragraph that describes him.

You may of course read more about the other finalists and what they have achieved, and you may prefer to vote for them, but you only get one vote, so we ask that you use it to vote for N332, through Francisco, and help raise our profile even further.

Having already been nominated last year, N332 has already become recognised by the four main road safety charity groups in Spain, and the European Commission for Road Safety, but as this is a public vote, it is one of the most important that can be awarded.

We would like to thank you in advance for taking the time to vote, and again, we would like to take this opportunity to extend those thanks to everyone who worked on the eBook project, the translators, and the companies who continue to support our development, all of which the volunteers at N332 would not be able to do without. So thank you.