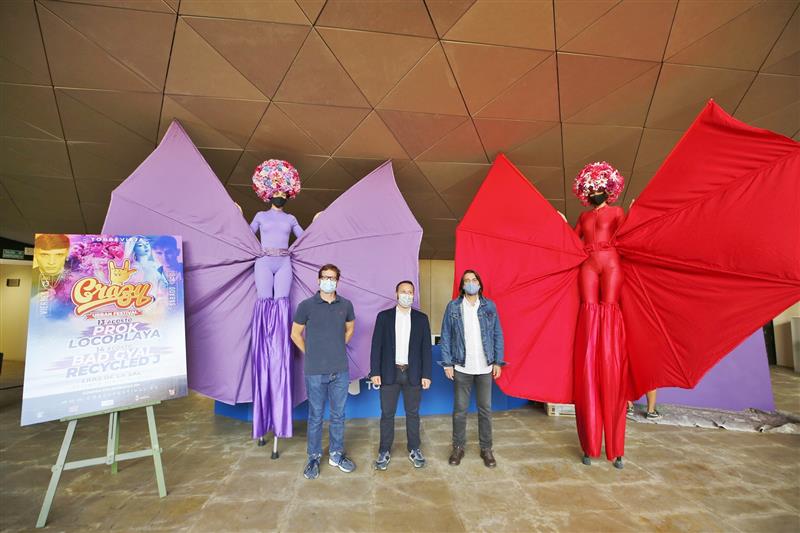 From June 31 to August 14, Torrevieja will host the first urban culture festival of the summer, for 14 uninterrupted days and in different spaces and outdoor venues of the city to bring live music, sports, gastronomy or street painting in its most current artistic manifestations. An event that aspires to become a benchmark with a multidisciplinary format in accordance with the needs to reactivate tourism, musical entertainment, culture and the need for socialisation that citizens are currently experiencing. 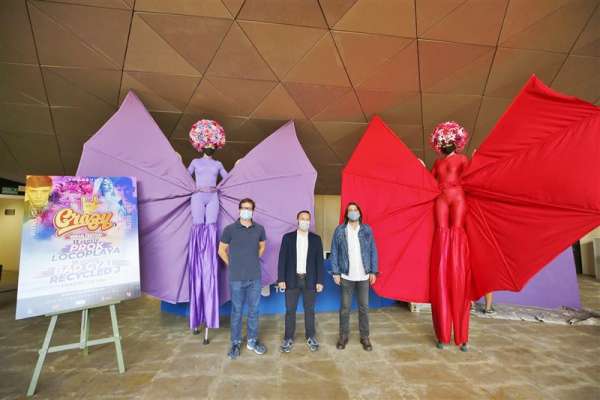 In addition, this first edition begins in a summer that is moving towards normality, with the progressive lifting of restrictions such as the possible goodbye to the mask in outdoor spaces or expansion of capacity at events.

With the name of Crazy Urban Festival, it has been presented this morning at the Ambigú Municipal Theatre of Torrevieja, in a press conference in which its programming and all the security measures that will involve the festival by the hand of the Councillor for Youth, Domingo Paredes, the head of organization for the production company SHIROTEN, José Ten, and for the technological platform expert in capacity control and traceability Safety Global, Ricard Sanz.

The festival will start with an ‘Opening Party’ on the 31st in the hands of prestigious DJs and which will be followed by different urban music actions in different parts of the city. In addition, the festival will also exploit its sports side with a week dedicated to the practice of water sports for beginners and lovers of surfing, or skateboarding: and another week in which the public will be made a participant in urban art, introducing them to the exciting and expressive pictorial language of graffiti or the skyline, which they will be able to practice in situ, and exhibitions that will fill murals and spaces in the city with this discipline of artistic expression.

Gastronomy will also be present to promote and activate sectors so affected by the crisis such as hospitality and commerce, through markets and traditional stalls and the performance of Carros de Foc, the innovative and avant-garde theatre company that makes sculpture works giant mobiles roam open-air spaces with choreography, balancing act, cloth and hoop acrobatics or rhythmic choreography with a fire fan and music.

The finishing touch will be the live performances at the Paseo de las Eras de la Sal in Torrevieja by 4 of the most prestigious and renowned artists of urban music, such as Prok, Locoplaya, on August 13, and Bad Gyal and Recycled J, on August 14.

The Councillor for Youth, Domingo Paredes, stressed that “the festival is a commitment that the Government team acquired in 2019 to carry out this type of concerts in summer and, in this unusual year, we wanted to carry it out, adapting it to health regulations “. Paredes added that the City Council’s intention is for this high-class festival to take hold and become a project for the future that can attract all kinds of young people to our city. In addition, he concluded, “we intend with this type of events to energize the city and that for 15 days urban and youth culture is present in a large part of Torrevieja”.

The safety device designed by the Crazy Urban Festival aims to guarantee the adoption of sanitary measures for the proper development of the festival, avoiding any type of sanitary risk.

During the entire festival, the technological platform, specialised in large events, Safety Global, will carry out an access control system that through QR systems allows to guarantee the traceability and identification of all the holders who buy their tickets to attend the events. scheduled with the largest number of attendees, especially the four announced live music concerts.

In the same way, it will apply the sectorisation of its spaces to guarantee safety distances in the public and the access control personnel and specialised personnel will be in charge of the correct use of gels, masks and temperature measurements by the attendees. Regarding the use of the bars or the public flows in the concerts, the device will be designed according to the news that may occur during the months of June and July.

On the other hand, and taking into account the favourable evolution of the pandemic and the magnificent data of the vaccination campaign, the operations and logistics of all the Crazy Urban Festival production intends to be considered in a dynamic way, in such a way that it is capable of adapt to the evolution of the health situation and the changes and new measures that the health administration can adopt.

In this context, it should be able to adapt to the elimination of the mandatory nature of outdoor masks, as well as to the distribution of spaces or the recalculation of the occupation of the surface and the facilities in which it is going to be developed. in accordance with the criteria that can be established on safety distances.