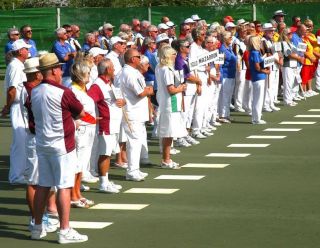 The 21ST opening ceremony of the National Lawn Bowls Championship was held in beautiful sunshine at San Luis Bowls Club on Saturday afternoon where almost 200 competitors, all resplendent in their club hose, paraded in front of a healthy and supportive crowd, at a venue adorned with the National and Regional flags.

The opening ceremony is always a very colourful affair and this year was no different as each of the 14 represented clubs marched on to the green in turn to be loudly applauded by the considerable number of spectators and guests who were present, before lining up in front of the officials’ platform.

Despite having the furthest distance to travel, Tenerife had the largest contingent on parade while the only representatives from the Costa del Sol were the two players from Benalmadena Bowls Club who received a particularly warm welcome as they led out the entire procession.

There was an especial welcome for the Umpires, always the beneficiaries of ‘friendly’ boo’s from the players, who tripped onto the rink to the echo’s of ‘Three Blind Mice’.

Following the parade of teams John Muldoon, Spain National Director and Vice President of the European Bowls Union, welcomed the bowlers and all of the spectators to the ceremony. He gave thanks to his assistant, Pete Bonsor, and to the members of his committee, all of whom have worked so tirelessly as they have prepared and planned the tournament behind the scenes.

He also thanked the sponsors and although there has been no major sponsor this year he was able to give thanks to the many local companies that provided their support. While Spanish Life Properties, CS Bowlswear, Winning Express, Aqua Pool Plaza, de Vere Investments, Ibex Insurance and the Leader Newspaper all provided either monetary or commercial assistance, the two main venues, Quesada and of course San Luis Bowls Club made available their facilities at a much reduced cost to the competition organisers, that in itself a major financial saving.

His address was not without criticism, however, as he expressed his disappointment at the Federacion Espanola de Bolos and the lack of financial support provided by them to the sport, and to the National Team in particular. He said there were problems within the organisation but was, nevertheless, extremely confident that Council Member Bob Donnelly would make representations on behalf of Lawn Bowls at the next meeting in Madrid.

He then wished all of the competitors a successful tournament, pointing out that it was their skills and exemplary conduct when playing that would make the competition such a memorable event.
There were a few words of welcome, particularly to the ‘big spenders’ of Tenerife BC, from the owner of the Casa Ventura, home of San Luis Bowls Club, Vic Slater, after which the National Director invited Carol Grey of Ibex Insurance to roll the first bowl of the 2015 Tournament

After all the formalities were over, the competitors retired for some welcome refreshment and a free buffet provided by Vic Slater before leaving to prepare for the start of the Pre National tournament on the following morning.

Normally bowlers would go straight into the Nationals Competition proper but with entries down in numbers on previous years the organising committee took the decision to provide an additional opportunity, the Pre National 3 Bowls Open Pairs, which is currently being played using a ‘Round Robin’ format, at the same two venues, until tomorrow, Tuesday, with the National Competition proper getting underway on Wednesday, opening with the Ladies Triples and the Men’s Rinks,

For the successful competitors this will be an arduous two weeks, while for those not so lucky there is always the opportunity to renew old acquaintances and to make new friends.
The tournament runs from until 23rd May and the greens being used, entry to which is absolutely free, are those at San Luis and Quesada.

The two Blue Ribbon events, the Gents and the Ladies Singles, will see both defending champions Pete Bonsor and Anne Allen, get their title defences underway later in the week. Quesada’s Pete Bonsor will play N Birch on Saturday at San Luis while Anne Allen, the first ever Nationals Champion from Horadada Bowls Club, will take on P Robinson on Monday 18th at Quesada.

Should Anne come through her first round tie she will certainly have her hands full in the second where she will meet the winner of the Lyn Greenland / Sue Johnston match.

One other to watch in the Men’s Competition will be Frank Close, the current Valencian champion, and the recent winner of the Champion of Champions Competition held only a couple of weeks ago. Frank joins the competition at the Preliminary Round stage against B Edwards while the Champion of Champions Ladies Singles title holder, Mel Highland, will meet the winner of the preliminary tie between Lyn Bonsor and Rees.

Spectators are more than welcome at all of the venues with play getting underway at 10am and 2pm at each venue and going on until late afternoon or early evening. A complete schedule of play is attached to this article at www.theleader.info

THE VIRTUAL COSTA BLANCA LEADER IS OUT NOW