CRIME RATES DOWN IN SPAIN
Advertisement 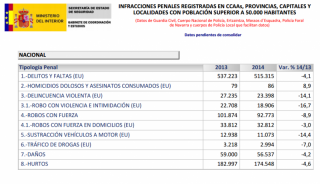 Crimes and Misdemeanours affecting victims aged over 64 increased last year by 7.1% compared to the data of 2012, with burglaries and robberies seeing a staggering 29.2% recorded increase, thefts were up 10% as were reported scams, up by 9.9%, however records of street robberies should an equally dramatic shift, but this time decreasing by 21.1%, according to figures released by the Ministry of the Interior.

The details were released as part of a Safer Society initiative launched last year, the first time such a campaign has focused on the over 64 age group, who represent 17.7% of the population of the country. As a result, the police embarked on a nationwide campaign visiting the elderly members of society, with presentations at over 2,200 day-care centres, as well as visits to individuals to offer crime prevention advice. The initiative also looked specifically at crime in schools, where a 3.7% decrease was recorded overall.

The data collected serves to allow better policing in crime prevention and detection, as investigators become more aware of trends in crime, and are subsequently able to deal with more issues in advance. Figures released this week reveal the crime statistics for the first quarter of this year now indicate an overall drop of 4.1% compared to the same period of 2013, with the records being collated to include national figures, but also broken down into Autonomous Communities and provinces. In addition, for the first time, data from the provincial capitals and cities with more than 50,000 inhabitants (according to the official census of the National Statistics Institute to the date of January 1, 2013) are given.

In a press conference detailing the date, Interior Minister, Jorge Fernández Díaz, explained how “crime statistics are becoming more complete, more accessible and more transparent”, which results in the law enforcers being able to work towards “an increasingly safer country”, with the transparency of the data being of legitimate interest” of citizens in relation to knowledge of public information.

With the inclusion of the many different police forces from around the country, including the likes of the Basque and Catalan police, the Ertzaintza, Mossos d’Esquadra, the Guardia Civil, National Police and others, the data presented shows an image more in line with reality of incidences of crime in Spain.

In the first quarter of 2014, have has been a total of 515,315 crimes and misdemeanours recorded in Spain, which represents a decrease of 4.1% over the same period of 2013, when the figure was 537,223. These figures result in a crime rate of 45.6 offenses per 1,000 people. This rate has been reduced by 0.5 points compared to the rate of December 2013 as a result of declining known criminal offenses.

Although the number of homicides has increased compared with the same period last year, increasing from 79 to 86, the worst place being Andalucía where 20 homicides were recorded, an incredible increase of 42.9%, violent crime in general has suffered a significant decline of 14.1%, as has robberies with intimidation, which fell by 16.7%, and theft of motor vehicles which dropped 14.4%.

For the Valencia region, there were 60,192 crimes and offenses recorded, a drop of 7.6%, although homicide increased by 20%, with 12 victims compared to 10 of the previous year´s period. Violent crime saw a 19% drop with 2,337 cases, robbery with violence and intimidation fell by 24% with 1,850 cases, whereas theft of motor vehicles dropped by 21%, with 1,100 records. In fact, across Valencia, with the exception of homicide, all crime categories were decreased.

In Orihuela, there was an 8.9% drop in Crimes and Offences, with 862 records in the first quarter of this year, there were no homicides recorded, and violence dropped by 27.3%, with 24 recorded incidents, robbery with intimidation dropped by 36% to 16 and theft of motor vehicles dropped by 28.6%. All criminal categories in Orihuela showed a reduction in the first quarter, with the exception of the zero figure recorded for homicide.

The situation is not quite as positive for Torrevieja, although there are some elements of decrease. Crimes and offenses increased by 4.8% to 1,542, there were 2 homicides, which resulted in a recorded 200% increase over the same period of last year. Violent crime saw a decrease of 22.7% to 51 cases, robbery with violence and intimidation dropped by 26.5% to 36, but robberies using force increased by a concerning 18.4% to 334, similar to robberies with force from homes which increased by a worrying 21.6% to 225. Overall theft increased by 9,4% to 501, but all other categories showed a decline, including thefts of motor vehicles, down 19.2% to just 21 cases.