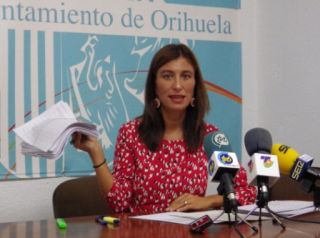 The former mayor of Orihuela, Mónica Lorente, held a press conference this week in which she presented a list of outstanding invoices against the municipal council for the 2014 year, which amount to 14 million euro.

Lorente described three of the sets of invoices as the “most scandalous”, being the provision of electrical street lighting, for which the company “Mercaluz” operates without contract, and the second being invoices to a lawyer who is said to be well known to the socialist group and is therefore directly benefiting from that association.

However, it was the third point which Lorente saw as the most significant, as invoices reveal that the government team spent 23,958 euro of public money to obtain a report used by the Table of Elders to block the censure motion proposed by her Partido Popular party, along with the liberal CLR group, in January of this year.

For the PP, this is proof of “cynicism to stay in power, as a plan hatched against the will of the majority”, according to Lorente, as the lawyer who presented the report also “happens to be the Mayor, Monserrate Guillén´s, personal attorney in this matter”.

Lorente said that “this is the value of political survival, survival comes at a cost of all Oriolanos of more than 800,000 euro in salaries of advisers and councillors”, and is a “scam”, before concluding that “policy makers will have to face justice, because the bills have already been recounted” and brought to the attention of the PP´s lawyers.

This conference coincided with the announcement on the same day that a Judge in Orihuela has opened an abbreviated procedure with the aim of prosecuting 35 people under investigation for alleged irregularities in past award of the service processing and collection and treatment of municipal solid waste in different contract awards in the municipality of Orihuela.

This case includes the former mayor of Orihuela, Mónica Lorente, as well as her predecessor, José Manuel Medina, both of the Partido Popular in Orihuela, and businessman Ángel Fenoll, who was recently found guilty in a separate corruption case and pending incarceration.

In the court order, the judge claims that there is evidence of corruption, malfeasance, prohibited trading, fraud, coercion and influence peddling in the actions of the defendants. The judge also states that there is an awareness of a “criminal network” headed by Fenoll, and in the case of Lorente, amongst her actions were that she acted “with knowledge of the illegality” of the stated contract award.

The order also temporarily suspends action against fellow PP politician David Antonio Costa. The actions of the order will be concluded within 30 days, at which point those named in the order will either be charged and brought to trial, or the case declared as still open.

Lorente then held a press conference on Thursday and stated that she has asked the judge to provide written clarification of the evidence, as, in her opinion, there cannot be a “a single clue, not a single suspicion” of her involvement.

Lorente also expressed her delight that the number of alleged crimes she is accused of have been reduced from five to three, prevarication, influence peddling and fraudulent management, “I am relieved” that the initial five crimes has now been reduced with the removal of “bribery and prohibited negotiations”, explaining that, “In street language, bribery means the number one crime that can be attributed to political office”, and that she has “peace of mind” that she is no longer facing these “abysmal crimes”.

Meanwhile, at their provincial political party conference of the Partido Popular held in Benidorm at the weekend, the members are expected to sign a new anti-corruption declaration, in which they vow to resign from office in the event of being charged in a corruption case.

The declaration is not enforceable however, nor was it clear how it would affect those already charged, such as almost the entire previous PP government of Orihuela, now serving in opposition, but set to fight the next elections to try to win back the municipality they lost last time.

Prior to that, earlier in the week, the Valencian government rejected a motion to prevent politicians applying for clemency in the event of criminal conviction; such was the case with the former mayor of Torrevieja, Pedro Hernández Mateo, whose request for clemency kept him free for many years.

The motion was tabled by the PSOE socialists of Valencia, with amendments added by Compromís, which also proposed the inclusion of necessary transparency to justify executive interference with the judiciary.

As the PP hold the majority of seats in Valencia, the move was rejected with the deputy of the PP, Pilar Sol, saying that they actually agree with the objective of the initiative of the PSPV, but justified the rejection as they believe that the issue is already covered by the new amendments to the Penal Code, which are pending approval.

Socialist spokesperson, Verónica López, criticised the rejection and use of the “nineteenth-century instrument” of law that dates back to 1870, to exonerate those convicted of corruption and who “exercise away from politics with neatness, proper example and transparency”, and operate in more of a “Godfather style”, stressing that “it is time to change this norm as neither the country nor the policies are the same as in 1870”, and to claim “progress and change” which prevents those who “vilifies democracy and citizen interests”.

For their part, Mónica Oltra from Compromís also criticised the “opacity and arbitrariness” of a pardon, whilst Ignacio Blanco of the EU said that “this is anachronistic of absolute monarchy and is being abused” and is against the “sense of impunity of the corrupt”.

ENGLISH LESSONS GET UNDER WAY AT THE AGE CONCERN CENTRE IN LA SIESTA.