THE SOUND OF MUSIC
Advertisement 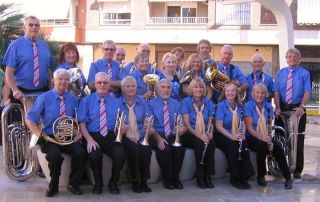 The Phoenix Concert Band pictured here in their new uniform, have recently been busy appearing at various venues for the Royal British Legion commencing with a Gala Concert at the Municipal Theatre in aid of the “Poppy Appeal”

Their next engagement was to play for the Remembrance Service at the Church at Mil Palmeras, for Orihuela Costa Branch of the Royal British Legion following this on the 11th. November they appeared at The Aula Cultura Theatre, Hondon de las Nieves for the Hondon Branch

The band are doing a number of Carol Services starting on the 4th.December at Los Balcones Church, followed by Spiritual Carol Service at Benjofar on Dec.9th.

Torrevieja Christian Fellowship Church. 10th.Dec. The popular Carols in the Square 5.45.pm. Friday 12th.Dec. After which a quick dash to Casa Ventura, San Luis to play carols for the Torrevieja Branch of the Royal British Legion.

The Band are going from strength under the professional directorship of their Musical Director , Julie Schofield, who for many years successfully conducted and trained various bands in the UK. The bands repertoire varies widely from, Marches, light classics, overtures, ballads, musicals, hymns, carols.

The band is based in San Miguel de Salinas and rehearse every Tuesday afternoon. Experienced players, having band experience , permanent residents here on the Costa Blanca ,Costa Calida who can commit to the band are always welcome to join.

Likewise any organisations or charities who wish to book the band for any functions do not hesitate to contact us.