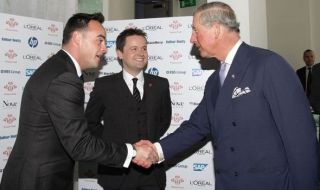 Following The Prince of Wales as he looks forward to the 40th Anniversary of The Prince’s Trust and celebrating the achievements of the charity.

Ant and Dec today announce a brand new and unique documentary project, as they set out to spend time with HRH The Prince of Wales to mark the 40th anniversary of his Prince’s Trust for ITV and track the journey since His Royal Highness set up the organisation in 1976.

As long term ambassadors for The Prince’s Trust, over the next year the pair will accompany The Prince on key engagements and get more involved in the work The Trust does to support vulnerable young people in the UK. The 90 minute special will air on ITV early in 2016, the year The Prince’s Trust celebrates its 40th anniversary.

Ant and Dec are a similar vintage to The Trust – both were born the year before it was founded in 1976 – and together with The Prince they will reflect on the four decades that have passed since The Trust set out to improve the lives of disadvantaged young people in the UK, meeting some of those it has supported along the way and hearing their extraordinary stories.

Ant and Dec will gain a close perspective on The Prince’s work as they visit courses and Prince’s Trust Centres to get an inside look at the efforts made to help 13 to 30 year olds, many of whom come from a care background, and who deal with a range of challenges, such as homelessness, mental health issues, unemployment, difficulties at school and crime.

Ant and Dec said: “We are hugely excited to be working with HRH The Prince of Wales on our first project of this kind. We’ve worked with The Prince’s Trust for years and know what an incredible job they do of supporting young people right across the UK. This is a unique opportunity for us to get under the skin of a great organisation and its founder, to pose the questions we’ve always wanted to ask and to see the achievements of the young people celebrated.”

Commenting last year on the occasion of the duo’s National Television Award celebrating 25 years in television, The Prince of Wales said: "I have had the great pleasure of meeting them on many occasions over the last fifteen years, as avid and generous supporters of The Prince’s Trust, taking time out from their extremely busy schedules to support and inspire those young people who come to us in disadvantaged and difficult situations.

As role models, they have led by example, showing a work ethic and a dedication that I know is appreciated by, and encouraging to, the many courageous young men and women who come to my Trust seeking guidance in trying to make a better life for themselves and in turn, in some cases, their families and communities."

Martina Milburn CBE, Chief Executive of The Prince‘s Trust, said: “The Prince’s Trust has made positive changes to generations of vulnerable young people since its inception and we’re really excited that Ant and Dec are going to be highlighting the work we do to mark this milestone in our history.”

The documentary will be directed by award-winning director Michael Waldman for Spun Gold Productions, producers of popular ITV programmes including Love Your Garden and Prince William’s Passion: New Father, New Hope. Filming will start early in 2015 and they are already working closely with Clarence House and The Trust to bring the story of the organisation to life.

The documentary is commissioned for ITV by Richard Klein, Director of Factual and Andrew O’Connell, Commissioning Editor Factual.

Andrew said: “We are delighted to be following The Prince’s Trust over a year to celebrate this landmark occasion. This special programme will see Ant and Dec spending time throughout the year with The Prince and seeing at close hand the work he does within the Trust aimed at enhancing young people’s lives up and down the country. This promises to be a major event in the schedule and a real treat for our viewers!"

Daniela Neumann, Creative Director at Spun Gold, adds: “We are so very proud to be producing such a landmark documentary to mark the 40th anniversary of The Prince’s Trust. We can’t wait to provide viewers with unprecedented access into the charity and more importantly highlight its life changing work that has touched so many lives and made a profound impact on our nation. It is always an honour to work alongside The Prince of Wales, and Ant and Dec are undoubtedly the nation’s most loved presenters. With their warmth and down to earth approach it is going to be such a moving and illuminating film.”