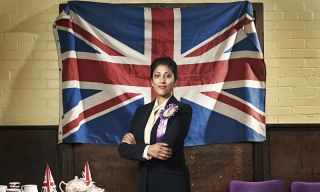 Actress Priyanga Burford stars as UKIP MP Deepa Kaur in this fictional documentary about the first 100 Days of a UKIP government. Here, she reveals more.

It imagines a scenario where UKIP have won the general election – they swept to victory in May – and there’s two narratives going on. One is the story of Deepa Kaur, who is UKIP’s only female ethnic MP, and the story follows her through her first 100 days in office, as MP for her hometown of Romford. And the narrative that’s going on as well as that is following the events that are happening around the country as UKIP puts their policies into action in their first 100 days. The two narratives connect in that whatever happens in Westminster, where policies are drawn up, Deepa then has to implement those policies in her own constituency, and deal with whatever consequences they yield.

What was it that interested you about the project?

The really interesting thing about this story is Deepa’s central dilemma, which is about when her personal principles and the things she believes are right, come up against her political ambitions. I think for any principled person, that crisis is bound to happen. Are you going to stick by what you believe, or are you going to out those aside for a minute to get ahead. That’s an absolute gift for an actor, to be able to explore that crisis and try and portray that struggle.

Do you think that’s a dilemma all politicians face? Is it possible to be a successful politician and hang on to your principles?

I think that is the central question, and I think you’re right, every single politician, and in act anyone with any sort of principles or ideology that they believe in, comes up against that sort of conflict at some point. You saw it with the Iraq war – there were politicians who resigned because they couldn’t be part of that even though their party was going ahead with it. So yeah, I think that happens a lot.

It was filmed in the style of a documentary – did that make it a very different kind of a shoot from a regular drama?

Yes, it did. I had to improvise a lot, and I had to improvise with the general public as well, which was very different from a normal shoot, and really exciting for me as an actor. Things were so unpredictable, and you had to think on your feet, which I really like. In some senses the shoot was a lot simpler, because everything was on the hop. We didn’t have lighting set-ups to rig, we didn’t have props to deal with, and set-ups and all those complicated things which take up time on a normal drama shoot. And the other exciting thing about it was that it felt like we were breaking slightly new ground. This was a drama, but it was filmed in the style of a documentary, so we were sort of marrying those two methods all the way along.

Did you study any politicians when you were researching the role? You have a real politician’s demeanour in the film, especially in dealing with the media.

I did loads of research in preparation for this – loads of research about UKIP. I watched a lot of speeches – especially politicians under pressure – things like the interview Margaret Thatcher did years ago on Nationwide about the sinking of the Belgrano. And Tony Blair being challenged by a man on the street, David Cameron being challenged by another man on the street, and how politicians deal with really sticky situations. And I also noticed that wonderful thing they are media-trained to do which is to not answer the question, but to answer the question that they want to answer.

Do you think the drama has a pronounced political bias?

I think it is a fantastic discussion point for people – that’s another thing that really drew me to it. To do something like that in an election year, which is going to cause anyone who watches it to have to have a conversation, and interrogate the things that they think, and debate the issues that we bring up – that is a really good thing to do, and it’s something that really interested me.

It’s not exactly painting a rosy picture of Britain under UKIP, is it?

No, it doesn’t, but I think Deepa’s a good foil for that, actually, because she’s a woman who’s motivated by good things – she wants to sort out her community, because she’s loyal to the people that she serves. She also happens to be a UKIP MP. Whilst the metanarrative is describing an imagined, fictional scenario, her character within that is someone trying to deal with some very negative circumstances and some really difficult dilemmas that have come her way, and she tries to deal with them from a place of honesty, trying to sort things out so they’re better for everyone.

What are your own political opinions?

I think the interesting thing for me, about taking on this role, was the central dilemma about where you draw the line – when it comes to that moment where you have to nail your colours to the mast, where your principles clash with your ambitions – portraying that struggle was the really interesting thing for me as an actor. As a woman, playing that sort of lead role, it’s really rare on telly to see a woman in a central position, who isn’t there in the context of a man, as love interest. I thought “I can’t miss out on this one.”

You’ve made a very political programme that’s not broadly favourable to UKIP. Is it fair to assume from that that you aren’t particularly favourable towards UKIP?

I’m not a UKIP supporter myself, but in approaching the role, my politics and the things that I believe are completely irrelevant. What’s relevant is for me as an actor to look at the world through that person’s eyes, and any actor playing any role at all has to leave their own stuff at the door, and open their mind and open their heart to the person that they’re portraying, in order to portray them in a three-dimensional way. I endeavoured to do that.

Do you think you developed a greater understanding of why people support UKIP through taking part in this project?

It was really interesting to go and meet people on the street, and talk to people in character, and hear their views and opinions – an also the massive spectrum of opinions that there is out there. There’s a lot of stuff that we shot, and during that process, hearing the way that people are passionately engaged with politics, that really excited me and interested me. People are deeply engaged in what is going on around them, and nationally, and internationally. I think the fact that people are looking at that is a really good thing.

This must have been a really exciting role for you. Did you enjoy the whole experience?

Yes, I really loved it. I loved the whole way of working in a new way, it was really challenging and exciting, because every day there was something completely unexpected that you had to react to. I loved that spontaneity.

You’re in pretty much every scene. Is it nerve-racking being in a production where you’re by far the biggest character?

Nerve-racking isn’t the term I’d use, actually. It felt challenging, certainly, but it also felt really exhilarating, to be playing that sort of a lead in that sort of a story, with those sorts of issues involved. And I had a whole massively supportive team of people who actually carried me through. There were other actor around a lot, like Hubert, who plays my PA. He was absolutely fantastic. And Tom, who plays my brother, as well. I had other actors, and the director and writer and producers, they were all right there with me, so when I was walking into those improvised situiations, I never felt “Oh God, this is me, alone, in this situation.”

Did you feel like Nigel Farage was a character in this drama?

His image hangs above it somewhat, doesn’t it? To be honest, from day-to-day, on the shoot, I was so involved with Deepa’s story and the situation that she was in, that while his presence was there in the background, it wasn’t that significant. We talk about him a little bit, and you can see the log arm of his policies affecting her office, but that’s the way in which we see him in the drama.

How did you find putting on a UKIP rosette and walking through a market? Was it uncomfortable?

It felt really challenging to me, yes. And there are points in the film where I really had to go to a completely different place from who I am as a normal person. But any actor does that in any role, if required. Actually, the people of Romford are lovely people, and I really enjoyed working with them. Spo they made it really easy for me to work and improvise with them, despite the fact that some of those things wouldn’t be very comfortable for me as me. But you leave that stuff at the door.

Will we ever see Priyanga Burford on political posters in the future?

Has it made you more sympathetic towards politicians and what they have to go through?

It certainly helped me understand the political processes in this country a lot better. I went to the House of Commons, I sat in a debate and watched the democratic process happening – which I suggest everyone does, actually. I found it really fascinating. I suppose it’s not a job that I fancy, but I certainly admire anyone whose principles and the things that they believe in are so strong that they make it their work, to try and make things better. And being on the stage they’re on, with the scrutiny they’re under, certainly made me realise how unbelievably pressurised that sort of life must be.

Advertisement
Related Topics:People
Up Next