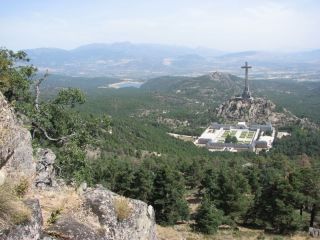 Fifteen Bishoprics, including Orihuela-Alicante, have been reported to the courts for failing to remove symbols of the Franco dictatorship and Spanish Civil war.

The Law of Historical Memory, which came into being in 2007, requires all symbols of the period to be removed, something that the Bishoprics have failed to carry out. The Law also requires the graves of Francisco Franco, José Antonio Primo de Rivera and General Queipo de Llano, be moved from their prominent basilica locations and the remains reburied elsewhere. Only the bodies of popes, cardinals or bishops are allowed to be interred on such sites.

The denuncia was served by human rights lawyer, Eduardo Ranz, last Tuesday April 14 on the anniversary of the proclamation of the Second Republic.

He states that the 15 Bishoprics all offend against the independence of the State Article 589 of the Penal Code. The include the bishoprics and archbishops of Madrid, Córdoba, Segovia, Cuenca, Merida-Badajoz, Coria-Cáceres, Badajoz, Almeria, Cartagena, Valencia , Orihuela-Alicante, Sevilla, Sigüenza-Guadalajara, Zaragoza and Oviedo.

Ranz also denounced the Archbishop of Seville requiring him to remove the grave of Lieutenant General Gonzalo Queipo de Llano from the Sierra Basilica of La Macarena, citing as precedent a case in Alicante, where the Basilica of Nuestra Señora del Socorro removed a plate containing the words ‘José Antonio’, which was commemorating the founder of the Falange.

He says that if he fails to get a response in reasonable time from the courts or from the Bishoprics he will personally travel to Rome and seek an audience with the Pontiff himself.

On 11 February, the anniversary of the proclamation of the First Republic, Ranz initially charged 38 mayors for alleged criminal contempt of Article 410 of the Penal Code. This offense carries with it a fine of three to twelve months and a penalty of disqualification from public employment or office for a period of six months to two years.

Advertisement
Related Topics:Penal Code
Up Next