More than 20,000 qualified motorists completed an online driving theory test recently, revealing a frightening statistic that and 1 in 3 qualified drivers in the UK failed.

Webuyanycar.com, the national online car buyer, asked drivers all over the UK to test their knowledge of common road signs and driving rules.

The interactive test was designed along the same lines as the official theory questions set for learner drivers by the DVSA. In fact, the questions were taken from the actual DVSA test.  People taking the test were asked to opt for one of four possible answers.

The driving theory test results varied by age, sex and location, but considering there were more newly qualified drivers in the 17-21 age group, it was surprising that they had the lowest pass mark of any age group.  Drivers in the 46 to 65-year-old group had the highest pass rate.

The online test showed pictures of various road signs all in use today and simple motoring questions similar to the official theory test.  The test results showed a slightly lower pass rate for women.

The webuyanycar.com test results are at odds with the latest DVSA statistics showing 53.6% of women pass the official theory test whereas men have a 48.7% pass rate.

The pass rate for the webuyanycar.com driving theory test also depended on where a driver lives with more rural counties like Somerset, Denbighshire and Derbyshire coming top of the tables for pass rates.  Some of the lowest pass rates were found in London and Middlesex, where the test was passed by only 2 out of 3 qualified drivers.

If your daring enough to try yourself, the test can be found at www.webuyanycar.com/driving-theory-quiz, feel free to email us your results. 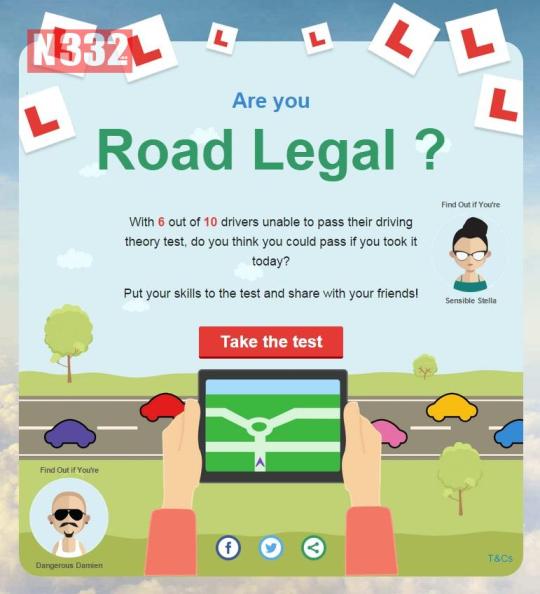