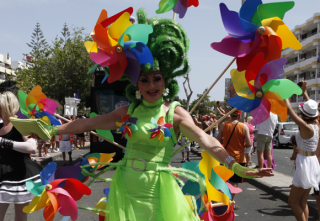 Thankfully, few Canarians have anything to do with pancakes, which are very much a British and American thing.

However, despite not having a ‘Pancake Day’ in quite the same way as in the UK, Canarians still enjoy the day, as well as quite a few days before and after, known as ‘Mardi Gras’, which means ‘Fat Tuesday’, or ‘Shrove Tuesday’. It is a time to really let your hair down before the gloomy period of self imposed penitence and repentance, known by Christians as Lent. Mardi Gras is a strange mixture of carnival, culture, tradition and religion, with the odd bit of debauchery thrown in for good measure.

I guess this why so many people enjoy it, and its larger excesses are usually forgiven and forgotten.

The self-imposed frugality of Lent is, thankfully, demanded far less by the Church nowadays, although for many, it is still a period of self reflection, denial and rededication. As with New Year resolutions, many people decide to “give up something” for Lent.

Often, this consists of taking a ‘gentle approach’ by denying oneself certain types of food, such as chocolate, or a biscuit with morning coffee, whilst others may choose to take ‘the big bang approach’ by giving up Facebook, shaving, alcohol or, as one of my friends is insisting upon this year, carbon emissions. The practicality of this last choice has yet to be explained to me.

Personally, I much prefer taking the ‘alternative approach’ of having a really good party during ‘Mardi Gras’, and not worrying too much about the period of self-denial during the following forty days; there’s plenty of time to worry about such things when we are dead.

During the week before the beginning of Lent, carnivals take place throughout the world, with some of the brightest, most unusual, biggest and best taking place in Spain and, in particular in the Canary Islands.

All of the inhabited islands and most towns have their own versions of carnival, with those in Las Palmas de Gran Canaria, as well as in Santa Cruz de Tenerife, which are billed as “Second Only to Rio”, offering some of the most spectacular experiences that residents, expats and visitors will never forget.

Annoyingly, unlike Christmas, Mardi Gras, Ash Wednesday and Lent can fall anytime between February 3rd and March 9th each year, since Easter is a moveable feast involving a calculation originally determined by the Catholic Church.

As a result, Mardi Gras in many countries can hit a wet, cold period, or a deliciously warm one, which is usually the case in the Canary Islands. However, an early Mardi Gras does explain why many of the islands’ young men, who tend to dress up as half naked angels, found the evenings so chilly this year.

Does any of this make sense? Not really, but does it have to? In any case, it is great fun and if you haven’t, you should try it sometime. It certainly blows away the winter blues!

If you enjoyed this article, take a look at Barrie’s websites: www.barriemahoney.com and www.thecanaryislander.com or read his book, ‘Expat Voice’ (ISBN: 9780992767174). Available in paperback, as well as Kindle, iBooks and Google Play editions.

THE LAST VOYAGE OF THE FRIGATE MERCEDES