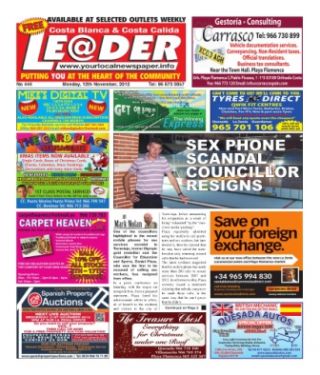 In late 2012, we reported how Torrevieja council had been rocked by allegations of wrongdoing, which highlighted a number of council officials had been implicated in a case whereas their public funded mobile phones had been used for personal reasons, racking up extortionate bills for the tax payer.
Olympic gold medallist and the Councillor for Education and Sports Daniel Plaza, who was accused of using his town hall issued mobile phone to regularly call sex workers, resigned from office. A number of other politicians remained insistent that they had done nothing wrong, although other immediately paid back the money, and even ex-pat favourite Graham Knight, who headed up the foreigner´s office at the time, was accused of using his mobile phone from abroad, for personal reasons.
This week, the judge considering the case, Natalia Martínez, based on a report from the judicial police, has called for six of those involved to appear in court, facing criminal charges of embezzlement, contrary to article 433 of the Penal Code.
Two of those called to court are still serving in the council, Eduardo Gil Rebollo and Javier Montoro, along with advisor Juana López Carmona, who will attend to face charges on the 25th of June. Whereas former councillors Daniel Plaza and José Manuel Pizana, along with Graham Knight, will appear two days later, on the 27th.
The current councillor for projects and public works, amongst other things, Javier Montoro, accumulated a bill of 1,300 euro in calls to his girlfriend, but he almost instantly returned the money and apologised for his actions, but continued in office.
The second serving councillor, who was the councillor for Public Safety, Eduardo Gil Rebollo, was said to have subscribed to a pay-per-view pornography channels. He made on apology at the time.
Daniel Plaza, the former councillor for education and sport, was reported to have used the mobile phone in his care for making more than 200 calls to sexual service providers between 2007 and 2012. He denied responsibility, although did admit that it was possible his phone had made the calls, but reportedly retuned the money spent.
Former councillor for education, José Manuel Pizana, was listed in the case as having had his mobile phone bill paid until October 2011, despite leaving office in the May of that year.
Juana López Carmona, who worked in the festivities department, is said to have called at least 170 late night competition lines, and Graham Knight, a now retired representative advisor to foreign residents, was said to have clocked up a bill of 1,140 euro whilst “data roaming” with his municipal mobile phone in the UK during a single weekend in November 2009.
Coordinator for the Unión Progreso y Democracia group in Torrevieja, José Serna, has called for the immediate resignation or termination of the councilors and advisors involved in the “misappropriation of public funds through the misuse of mobile phones”, on account of their actions undermining the entire political process in the city, much as was the case of the former PP mayor, Pedro Hernández Mateo, convicted of trespass and forgery but still evading prison, calling both the actions of those directly involved, and their political group allies who have failed to take action, as “shameful”.
If found guilty in the courts, those involved face a fine, as well as being banned from holding public office for between 6 months and 3 years, although it is believed that any refunds will be taken into consideration as mitigation when passing sentence.

MORE IMPROVEMENTS ON THE ORIHUELA COSTA