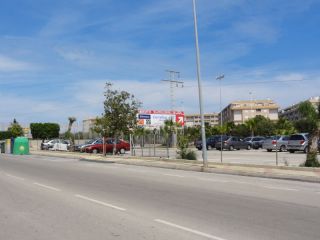 The Los Verdes green party of Torrevieja have denounced what they describe as the “passivity” of the ruling Partido Popular in taking action against returning a plot of land which had been fenced off and used as a private car park, which is in fact a public and green space.

In May of last year, Torrevieja City Council published a notice in the official bulletin stating that they have initiated the process of recovering municipal land, categorised as intended for public and green use, of the Sector 22 urbanisation “El Acequión”, located alongside the N-332 near the park of nations, which is currently paved and used as parking exclusively for the private use of residents of the urbanisation.

This move was made after 14 years of “turning a blind eye” to the fact that residents of the urbanisation had claimed the land for their own use. In 2012, the process began after land had been identified as being of public denomination, and so a series of actions began to reclaim the land, recovering it for us of all citizens.

However, according to the greens, despite the efforts of municipal officials whose actions forced the eviction process to begin, the government team has remained “with folded arms”, to the point that the area has returned to being used solely as a private car park once again.

The 8,000 square metre plot of land was part of a development by the company Edén del Mar, one of the companies alleged to have been involved in a case where the former PP Mayor Torrevieja, Pedro Hernández Mateo, is alleged to have benefited from the sale of land at Cañaica Larga, purchased for the equivalent of 180,000 euro, and sold for 5.4 million.

The greens are demanding an explanation of the “accumulation of irregularities” by the current Mayor, Eduardo Dolón, the Town Planning Department and the PP government on the whole, to clarify the reasons that this developer has been allowed such “privileges”, and no action has been taken on behalf of the residents of the city.