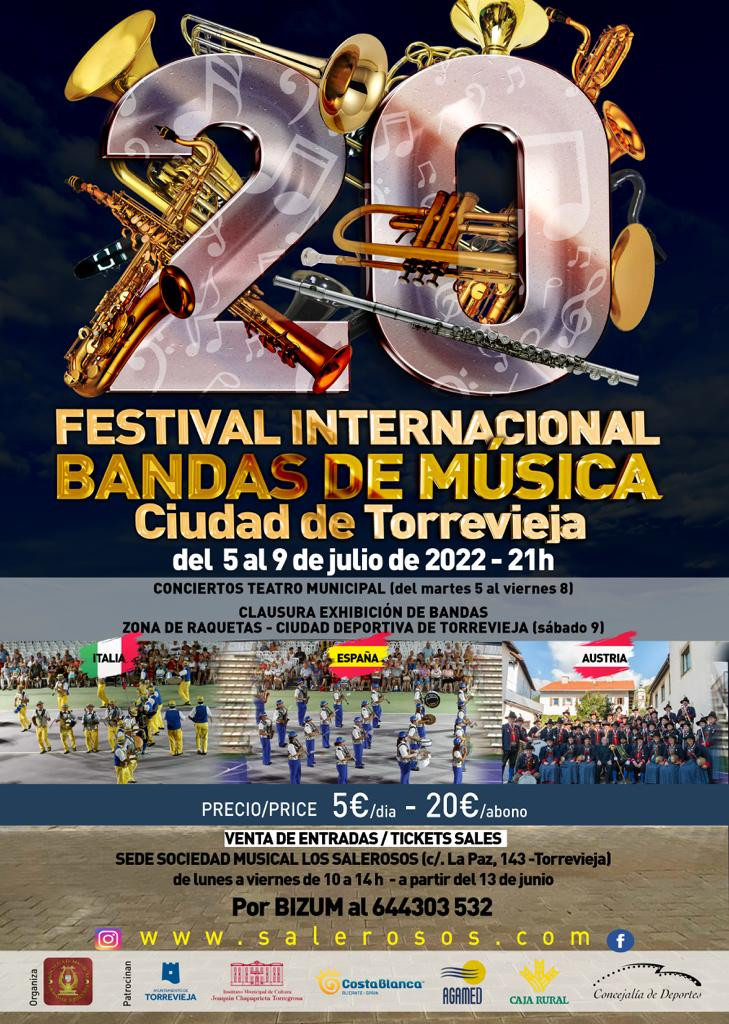 The Councillor for Culture in Torrevieja, Antonio Quesada, together with the president of the musical society Ciudad de Torrevieja “Los Salerosos”, Guillermo Hernández, and the organiser of the festival, Naiara Díaz de Mendivil, presented the 20th International Band Festival of Music ” Ciudad de Torrevieja”, which will take place from July 5 to 9, in the Municipal Theatre.

This is a very special edition, since on the last day there will be an exhibition of all the bands on the central tennis court of the Ciudad Deportiva de Torrevieja, with a final performance of all the bands together, thus recovering the tradition of the last day of the festival that is none other than the joint performance of the participating groups, but this time in a new format.

The festival opens with a performance by the host band on July 5, for which a concert is being prepared with works that are attractive to the public, such as La ruta del Cid, directed by its director Alejandro Gómez.

The second night of the festival will be the meeting between the Sax Musical and Artistic Assoc. Student Band and the Soc. Music Youth Band City of Torrevieja “Los Salerosos”. Both youth bands were born from the need to create a project for young learners to support and motivate them through a more active participation in the musical society. These bands of students represent the quarry of musicians of the respective older bands.

On July 7, the band “Städtmusikkapelle” from Hötting, Austria will perform.

It is a band with almost 100 years of history that belongs to the province of Tyrol. This makes it one of the main bands in the city of Innsbruck (capital of Tyrol). There it is traditional for each band to have their own traditional costume. In the concert, they will offer a very varied repertoire that will include traditional pieces from their country. It is currently made up of non-professional musicians of all generations. As a characteristic of their traditions, every May 1, they visit the houses of their friends and patrons.

On July 8, the Associazione Musical “Brasilino Severini” of Faleria (Italy) will perform.

This musical band, born in 1900 in the small town of Faleria, currently directed by the member of L’Arma dei Carabinieri, Sergio Belardi, has participated in major events such as the Thai Festival before the Thai ambassador in Rome, and international performances such as in Prague or Spain.

On July 9 is the closing of the festival, on the central tennis court of the Ciudad Deportiva, and will feature performances by the bands “Städtmusikkapelle” from Hötting, “La Frustica” and the Folkloric Group “Los Salerosos”

Regarding La Frustica, this folkloric group was born almost at the same time as our society (Los Salerosos), because it is almost 30 years old. What is characteristic of this group is that it is only made up of men, and is led by Sergio Belardi, a member of L’Arma dei Carabinieri and also director of the Asoc. Mus. Brazilian Severini. It is a very dynamic group with very striking choreographies and has performed all over the world, from “Columbus day” in NY, to Chinese New Year in Hong Kong and Shanghai, even in parades of military bands such as Musikparade in Germany, France and Belgium. It has recently performed in Murcia, at the burial of the Sardine, and is the official group of the Rugby Team.

The closing event will begin with a welcome to the public by all the bands, and later each band will act alone with its exhibition. The end of the evening will be with the interpretation of works and hymns all the bands together.

Free Paella at Carrefour on Saturday

Laser Combat event will be held in the Plaza de la Constitución, on 15 July